Just How Do You Make Dinosphere Bigger?

On March 8, 2021, we did the unthinkable. We closed Dinosphere: Now Your’e in Their World®—our most popular exhibit—for more than a year. This wasn’t a surprise. And it certainly wasn’t an extinction-level event. This was a planned closure. While closing Dinosphere® might have caused some heartburn and maybe even a few sleepless nights for many, the proverbial light is at the end of the tunnel. And what’s shining that light? Some massive creatures surrounded by beautiful, immersive environments in a major expansion to the Dinosphere® that you’ve already come to know and love, created in a way that only The Children’s Museum can.

Before we celebrate the March 19, 2022, opening of the new Dinosphere® and its four areas—Giants of the Jurassic™, Creatures of the Cretaceous™, Monsters of the Mesozoic Seas™, and the Dinosphere Art Lab—we thought we’d take a look back on what has brought us to this exciting moment.

Timeline for the new Dinosphere®

We announced Mission Jurassic—an exciting new partnership with institutions around the world, led by The Children’s Museum created to explore and excavate the fossil-rich site in Wyoming known as the Jurassic Mile™. This site is a treasure trove of Jurassic fossils—bones, trackways, and preserved plant life from millions of years ago—that reveal never-before-told stories about the Jurassic Period. 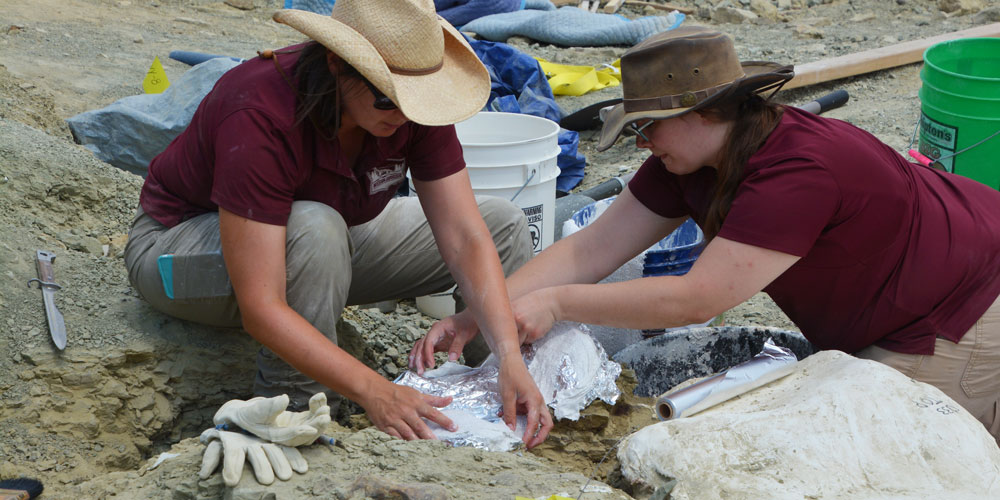 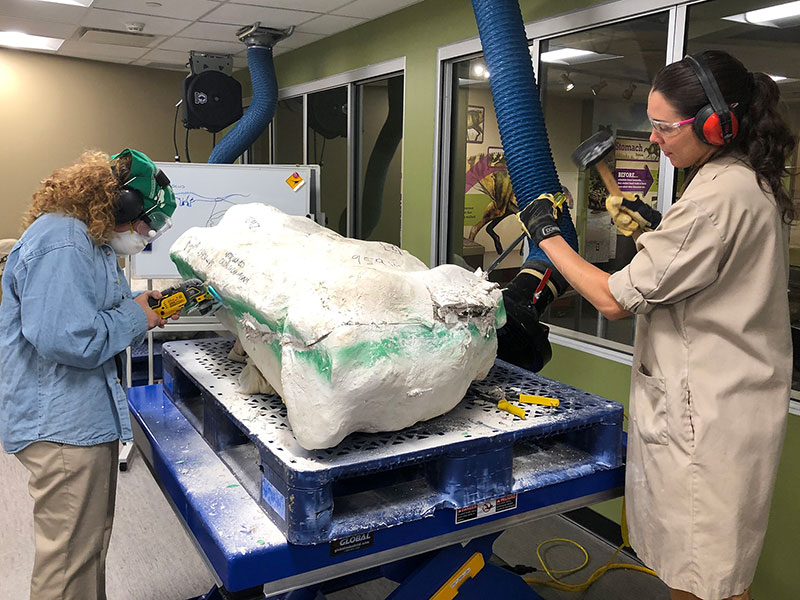 The sauropods from the Jurassic Period are larger than any of the Cretaceous critters that our scientists had worked on in the Polly H. Hix Paleo Prep Lab. Bigger bones meant we needed bigger equipment. And more room. So we built a new prep lab for our scientists to work on the massive bones they dug up in Wyoming. Now they work in both labs!

Summer 2020—our scientists return to the Jurassic Mile™

The Jurassic Mile™ is a treasure trove of fossils. Extraordinary Scientist-in-Residence Professor Phil Manning and Mission Jurassic Lead Scientist has described it this way: “There’s enough dinosaur material here to keep a thousand paleontologists happy for a thousand years.”

The two giant four-legged, long-necked sauropods that will be on display in Giants of the Jurassic™ were dug up by our scientists at the Jurassic Mile™ dig site. While in the field, these two specimens were referred to as Lower Sauropod and Upper Sauropod, based on their location in the dig site. Tons of fossils were brought to The Children’s Museum for preparation—including Lower Sauropod. The Baptanodon and a significant portion of Upper Sauropod were sent to Research Casting International (RCI) for prep and mounting. RCI also gave our Plioplatecarpus a good cleaning.

A cast of the world-famous SUE the T. rex helped fill the upcoming Dinosphere void that would inevitably come with the long, but temporary closure of Dinosphere. A cast of our own Bucky the teenage T. rex joined SUE in a temporary exhibit—SUE Meets Bucky.

March 2021—Dinosphere® closes to the public

All fossils were removed from the dome in Dinosphere® and the artwork was removed from The Mann Properties Gallery Featuring the Lanzendorf Collection of Dinosaur Imagery.

A second shipment of Lower Sauropod fossils was sent to RCI for mounting.

In preparation for reopening, our scientists began cleaning all Cretaceous material that was on display in the original Dinosphere®.

Our paleo team completes their part of the preparation of the Lower Sauropod from the Jurassic Mile. It will be shipped to RCI so it can be mounted.

Paleo team makes histology sections for the exhibit by using bones from the Jurassic Mile™.

The last pieces of the Lower Sauropod are shipped to RCI for mounting.

July 2021—return to the Jurassic Mile

The first wave of The Children’s Museum paleo team returns to the field in Wyoming. 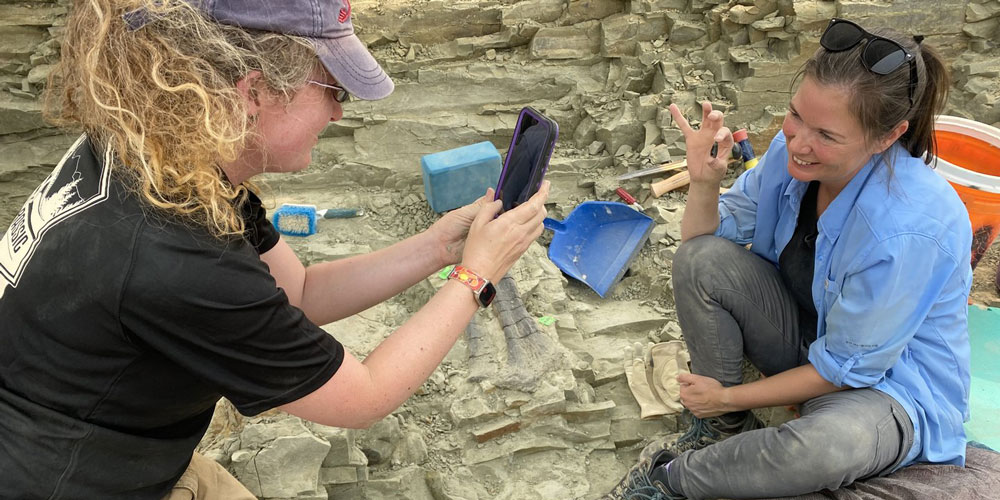 More scientists returned to the dig site. The Jurassic Mile™ is so rich with fossils, work will continue at this site for many years.

“Have no fear because this is not our last season digging here…The future of the Jurassic Mile™ is longer than a Diplodocus.”
Lead Paleontologist Dr. Jennifer Anné

Recreating the Jurassic Period environment requires a lot of theatrical lighting! A new catwalk was installed, which allows us to hang lighting equipment and video projectors safely above the sauropods. Having this catwalk helps our team easily access this equipment so they can inspect and maintain it for years to come!

A team from RCI visited The Children’s Museum to install a platform and get the stage ready for the sauropods to be installed in Giants of the Jurassic™. Do you remember how we said these dinosaur bones are huge? They needed a platform that was specially-designed to hold them! We told RCI what we needed for this exhibit space and they created the platform in their studios.Then they brought the platform to the museum and installed it, making sure it fit perfectly with the armatures that carefully cradle each fossil. They also sculpted and painted the surrounding rockwork to look like the riverbed we imagine our herd of sauropods is walking through. 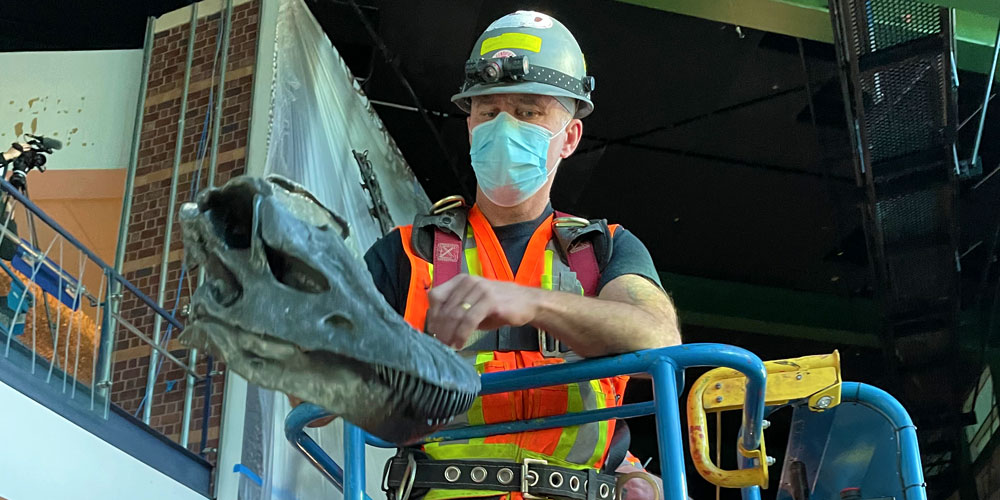 A team from RCI in Canada installed Lower Sauropod in Giants of the Jurassic™. After millions of years underground and months of preparation, this colossal creature was finally in its new home! 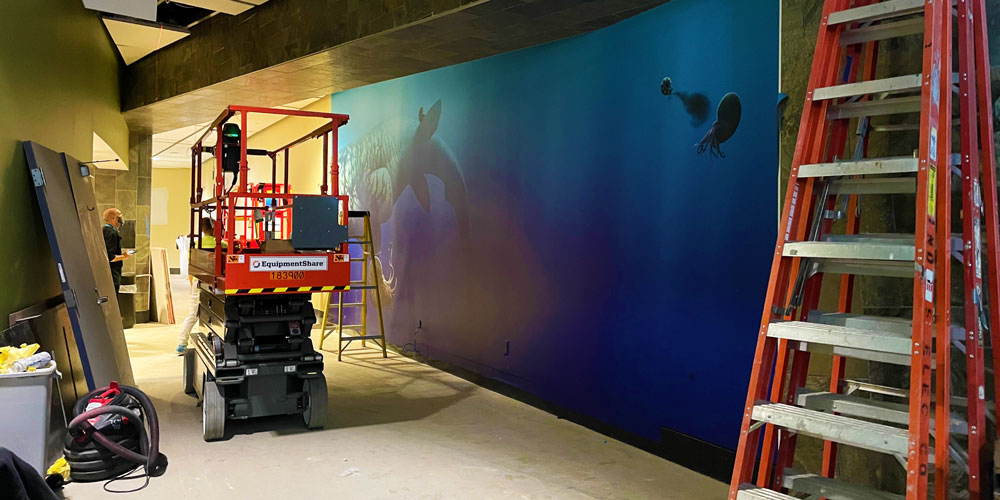 Installation experts also installed some amazing paleo art murals to represent the environments in Giants of the Jurassic™ and Monsters of the Mesozoic Seas™. 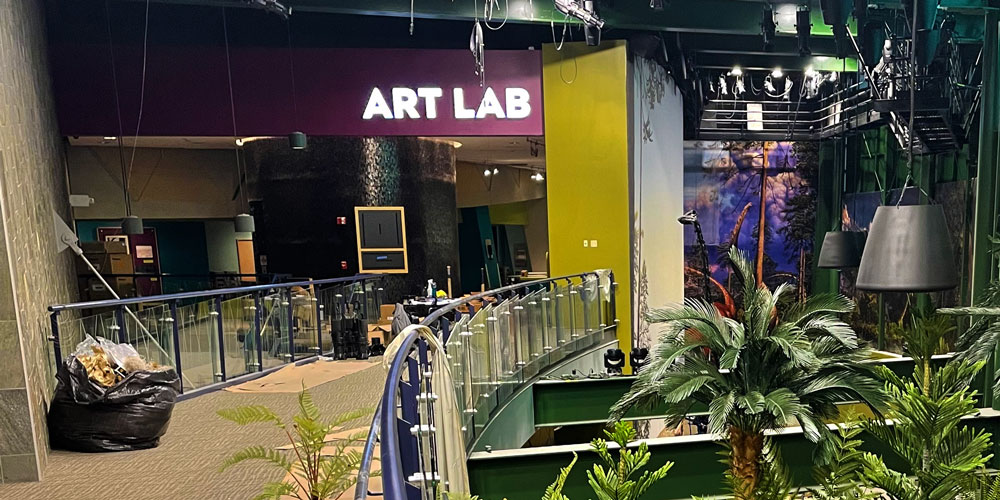 Did you know you can try your hand at creating paleo art in the new Dinosphere®? The Dinosphere Art Lab is the perfect place for you to combine your newly-acquired scientific knowledge with your own spark of creativity. You’re really going to dig it.

Casts that will be featured in Monsters of the Mesozoic Seas™, including a giant ammonite, Archaelon, and Elasmosaurus casts were installed by RCI.

Huge murals depicting enormous sauropods were installed inside Giants of the Jurassic™. 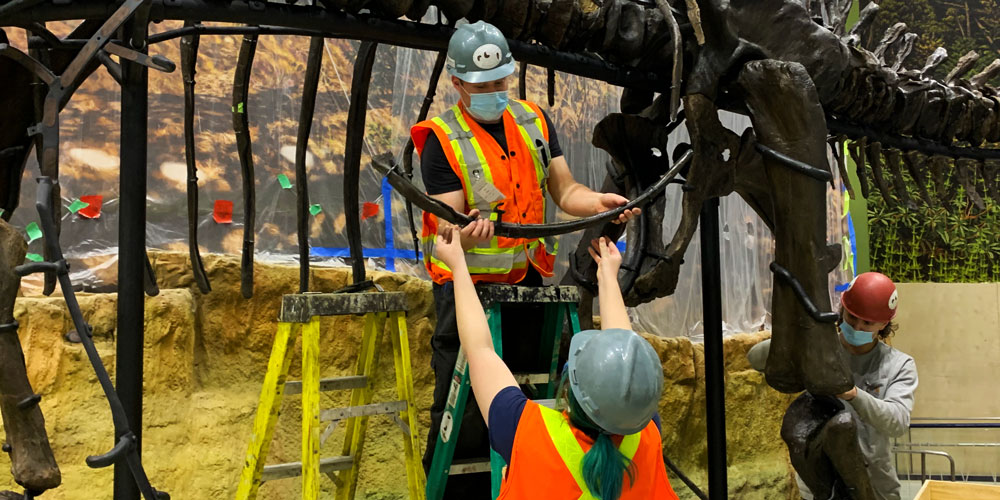 Our friends from RCI returned one more time to install Upper Sauropod in Giants of the Jurassic™. They also installed the Baptanodon and Plioplatecarpus fossils in Monsters of the Mesozoic Seas™.

The reinstallation of the dinos in Creatures of the Cretaceous™ was completed. 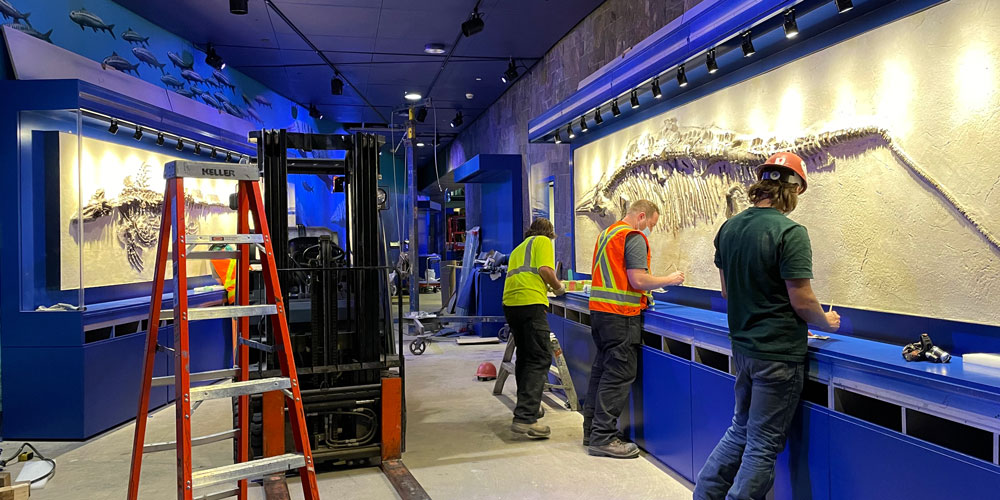 Our team continued installing fossils and other objects in Dinosphere Art Lab, Giants of the Jurassic™, and Monsters of the Mesozoic Seas™.

The remaining displays, object, and interactives in Dinosphere Art Lab, Giants of the Jurassic™, and Monsters of the Mesozoic Seas™ will be installed.

The cast of Bucky, which had been on display in the Sunburst Atrium, will returnto storage in our Collections Department. Speaking of the Sunburst Atrium—we have a brand-new show that will be associated with the new Dinosphere®. It’s called Dino Planet: A Trip to the Jurassic. You’ll travel back in time—150 million years ago—to discover first-hand what life was like for the Jurassic giants. You’ll encounter sauropod babies, adolescents, and adults and discover just how these giants grew to be so huge! Be sure to check our online calendar for dates and showtimes. This show will blow you away.

The many team members who will staff this massive exhibit have begun walkthroughs, rehearsals, and run-throughs as all of the final pieces are starting to come together.

The new sound and light show will be completed. It will help set the stage for what you’ll experience when you enter Giants of the Jurassic™. And we really mean “enter.” It might not seem possible, but this new expansion of Dinosphere® is going to be even more immersive than before. We aren’t kidding when we say Now You’re in Their World. 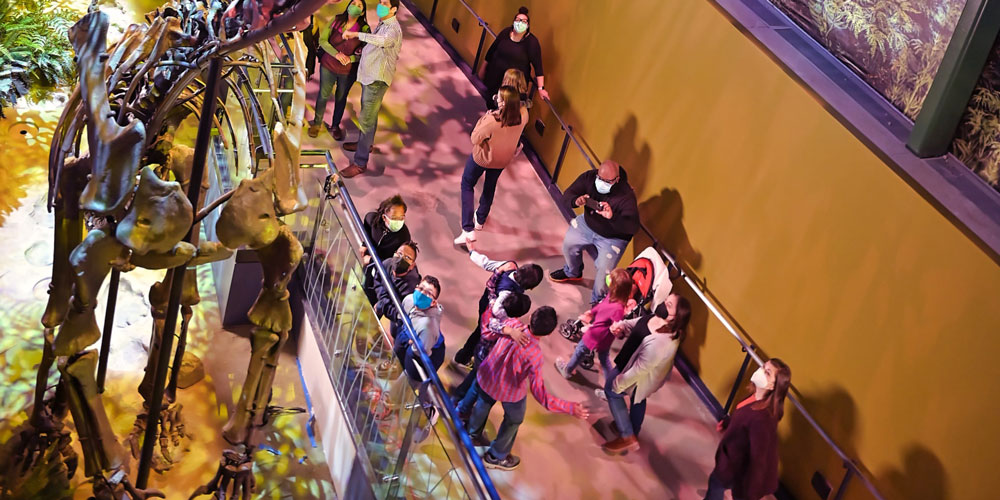 Walkthroughs, rehearsals, and run-throughs will continue as we work towards perfecting the experience for Opening Weekend, March 19 and 20, 2022!

Are you ready? We are!

They ruled the earth for millions of years. A team of scientists led by The Children’s Museum dug them out of the ground. Now they’re here! And we cannot wait to share this brand-new dinosaur world with you.

Your jaw will drop as you explore Giants of the Jurassic™, Creatures of the Cretaceous™, and Monsters of the Mesozoic Seas™ inside the new Dinosphere®. This awe-inspiring immersive exhibit is full of authentic fossils, memorable experiences that include a sound and light show, engaging interactive programming, hands-on interactives and objects, and one-of-a-kind discoveries with real scientists as they continue to work in our two operating paleo labs. Let your imagination run wild as you combine scientific discovery with artistic creativity in the Dinosphere Art Lab.

Opening Day is March 19, 2022. Advance tickets are highly recommended—even for members! We anticipate the opening weeks to be very busy and they might even sell out. We don’t want you to miss this amazing experience. So reserve your tickets today.