Why Did Alice Roosevelt Own a Pet Snake Named Emily Spinach? 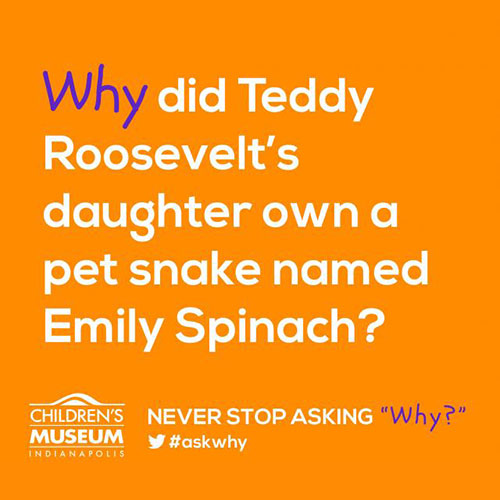 To celebrate Presidents Day, we wanted to share an interesting fact about one of our most interesting presidents, Theodore Roosevelt! Teddy Roosevelt and his children were known for keeping many unique pets in the White House. Roosevelt's daughter Alice was 17 when her father began his presidency in 1901. Her pet garter snake was named Emily Spinach "because it was as green as spinach and as thin as my Aunt Emily."
Alice also loved dogs. She had a long-haired Chihuahua named Leo (pictured) and a small black Pekingese named Manchu, which she received from the last empress of China during a trip to the Far East.
Alice's little brother Quentin once bought four snakes from the pet shop and brought them into the Oval Office to show his father. The President was holding an important meeting, and when Quentin dropped the snakes on the table, the officials scrambled for safety. The snakes were eventually captured and later sent back to the pet shop.
The Roosevelt family didn't stop with snakes and dogs. They had many unusual pets with funny names, including...

See a list of all of the presidential pets on Wikipedia. (Calvin Coolidge had an impressive family of pets, too!)

Text adapted from the National Park Service and National Archives and Records Administration.