Why Is There Only Life On Earth? 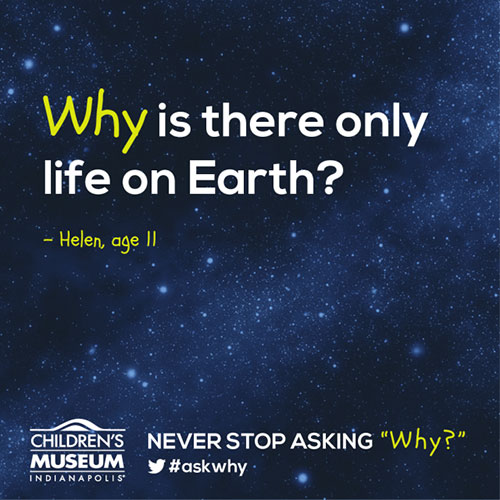 We all have questions about space. So why not ask an astronaut? This series of Never Stop Asking "WHY?" includes questions submitted by YOU and answered by the museum's astronaut Dr. David Wolf!

We really don’t know if life only exists on Earth! We do know that life as we understand it requires very special conditions to exist. In fact, many scientists believe that these conditions exist elsewhere and offer the possibility for life beyond just our Earth. These may be very simple organisms such as bacteria or even more complex life such as plants and animals. All living things need some sort of food, water, the right atmosphere and temperature. Humans for example, need to breathe in oxygen and can survive in temperatures that aren’t extreme hot or cold. Even the strength of gravity determines the form of our bodies such as our bones and muscle strength.

Other planets don’t have exactly the same conditions as Earth so life would be somewhat different there. For example, these places may have a different atmosphere so there wouldn’t be the right amount of oxygen for us to breathe. All living things on earth have adapted to our atmosphere, which means all living things need our mix of atmospheric gases. Life elsewhere would be specifically adapted to their own conditions.

Water is a really important ingredient to sustain the kind of life we know on Earth. Both plants and animals require water for survival. Planet Earth is very special because it contains so much water in liquid form. We have yet to find a planet with the same amount of liquid water as on earth but there are many new “exoplanets” being discovered orbiting other stars that offer this possibility. One of things that the Mars Rover, Curiosity, is looking for is the presence of water now or evidence that it existed in the past on Mars. It appears that Mars did have lots of liquid water at one time. Conditions might have been right on Mars to support life. There is even the possibility that life formed on Mars before it formed on Earth and that Mars “seeded” life on Earth.

For living things the correct temperature is really important. Most life on earth lives in warm to moderate temperatures. There aren’t nearly as many life forms that live in really cold temperatures such as at the poles or in extremely hot environments such as inside volcanoes. One factor that affects the temperature of a planet’s atmosphere is its distance from the star it orbits around – it’s “sun.” The planets closest to the sun are very hot, while planets that are farther out are much colder. People couldn’t survive on these planets. We are detecting “exoplanets” around other stars at the right distance to have the right temperature for life to exist. So, there still might be life on other planets, or even the moons of other planets, but it would probably be very different than life on Earth! These other possible forms of life would be very far away so they are not something to worry about.

Looking for more Never Stop Asking "Why?" questions? Catch up on all of the past "Why's" on the blog.