Welcoming More Women in STEM to Our Exhibit Walls

The world is changing at a breathtaking pace. It’s becoming more complex every day. In order to navigate this ever-changing world, we need to equip our children with the knowledge and skills to solve problems, make sense of information, and to gather and analyze evidence to make informed decisions. Introducing STEM—science, technology, engineering, and mathematics—literacy to children will help them solve complex problems in all aspects of life. At The Children’s Museum, we continue to remain vigilant to ensure our ever-changing museum reflects the ever-changing world around us.

You might notice a few new faces in Beyond Spaceship Earth and Corteva Agriscience ScienceWorks the next time you visit. You also may have noticed that all of these new images depict women working in their respective STEM fields. These updated pictures are part of a larger initiative to promote equal gender representation throughout the museum and honor our commitment to encourage girls and women to pursue STEM careers. We’ve made these changes because seeing and learning about real female role models in STEM is critical for girls to understand that there is a place for them in these disciplines.

Many of these new images of real women working in STEM careers come from the IF/THEN Collection, which was created to “increase the representation of women and gender minorities in the fields of science, technology, engineering, and math.” As part of this initiative, The Children's Museum participated in a study with 50 other institutions to gather data on how women and gender minorities were actually being portrayed throughout the museum, from marketing all the way to exhibits. The initial survey found that in Beyond Spaceship Earth, 13% of people pictured were female. Now, 25% of the STEM professionals featured in the exhibit are women, but it should be noted that this includes the Indiana Astronaut Wall of Fame which is predominantly male. In Corteva Agriscience ScienceWorks, it was found that 35% of all people pictured were women, but once the new images are installed, the percentage of women represented will be at 52%.

The team in charge of this project also made sure we are including women of color in our exhibits as well. In Beyond Spaceship Earth, there are two African American women featured side by side. One of the women is astronaut Joan Higginbotham, who worked at NASA for twenty years as an electrical engineer both on Earth and in space. Beside Joan is Mary Jackson, the first African American woman to work at NASA and someone you might already know from the movie Hidden Figures.

In Corteva Agriscience ScienceWorks, it was found that only 13% of all STEM professionals featured were BIPOC (Black, Indigenous, and other People of Color), but once all of the images are updated, it will increase to 39%.

What is so special about all of these images is they are of actual women in STEM professions doing their jobs, as opposed to stock or posed photos. Although we aren’t specifically telling the stories of these women in the exhibits, each of them have had incredible careers and serve as trailblazers for women in STEM. One of the female astronauts who now has a spot in Beyond Spaceship Earth is Kate Rubins. Kate is featured in the International Space Center to show visitors the importance of experimenting with growing veggies in space. Although the inclusion of her image helps the exhibit achieve a more equal gender representation, her panel also needed to be updated to reflect a very exciting new update in the world of science, which is that they have successfully grown lettuce in space. As updates within the STEM world continue to happen, we look forward to finding ways to represent the changes in science along with the diverse people leading the way in these fields.

There is one woman who will soon be featured in Corteva Agriscience ScienceWorks who actually lives and works in Indianapolis. That woman is Ronda Hamm. Ronda is a “national award winning informal educator and entomologist who is passionate about sharing her love for science and agriculture experiences.” She has founded three STEM outreach programs, works as the Global Academic Relations Manager at Cortiva Agriscience, and is a huge advocate for girls and women interested in pursuing STEM based careers. 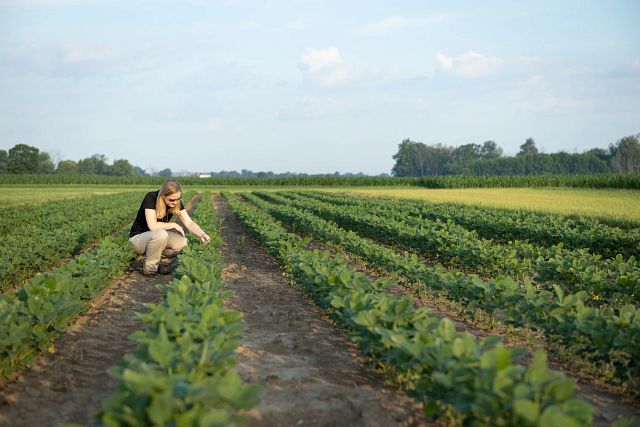 When asked what it means to her to be featured in The Children’s Museum, Ronda said, “I’m extremely honored and humbled by the opportunity to be featured in the museum. My greatest hope is that it will inspire the next generation of women in STEM to consider the options available to them and the impact that they can have in science.” She also wants to encourage girls interested in pursuing STEM careers, like her own, to explore. “Don’t be afraid to try new things and even things that you don’t think you’ll like. You learn and discover from every experience.

We want to show children of all ages and genders that they can be anything if they set their minds to it, and a big part of inspiring those dreams is providing young children with role models who they can see themselves in. So next time you visit The Children’s Museum, take a moment to look at some of the amazing women in our exhibits who prove you can do anything you set your mind to.

This project was made possible by a grant from the Association of Science and Technology Centers’ IF/THEN Gender Equity Project, part of the nationwide IF/THEN initiative launched by Lyda Hill Philanthropies to advance women innovators in STEM fields and inspire the next generation of girls.